I have really written something related to this TV series before and I am always concerned with the play. You can see them from the following entries: “花より男子2插曲flavor of life配歌词”, “Some Self-feelings After Seeing A TV Series” and “韩国版《流星花园》即将开拍，主演人选成焦点”. While From January 5th this year, Korean version began to play on KBS2 TV station beginning on 20:50 (Beijing Time) on Monday and Tuesday evening. And it has been on 17 series till now. Because of a serious traffic to the female leading role on 26th last month, one series which had been played on 2nd this month was changed to one talk show to other four male characters. I believe that many people especially young people are concerning with this TV series with a story of Cinderella and Prince.

You know this TV series comes from this Japanese drama with other two versions of hana yori dango (Meteor Garden). And many of you might be in love with this TV series “Boys Over Flowers”. Even though the casting group for this drama is new and with unknown Korean artists, they are pretty boys, INDEED!!

wohoho… The female character who takes the Makino’s (杉菜) role is so cute, unlike the Taiwanese and Japanese version. I like her so much.

Of course, the artists who take the Domyouji Tsukasan (道明寺司) and Hanazawai Rui (花泽类) are a kind of beauties… Surprisingly, Sojiroh (西门) in this drama is so extraordinary that attracts my eyesight. Nah, he is just so cute! kakaka…. ehm. about the Akira (美作), he looks not bad. Sometimes I may get confused by their names. It is not 100% same with the original story. I think I prefer this than the Taiwanese version. They play all sorts of sports in this TV series from the sea to the sky.

Conclusion: I LOVE this TV series!! ^^

Here I only publish two posts about this TV series and two wall papers I am now using now on my computers. You can go to Baidu Tieba “韩版花样男子” to know much detailed information about this play. 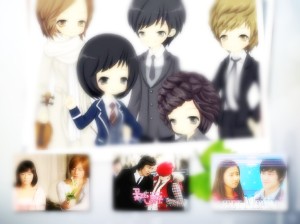 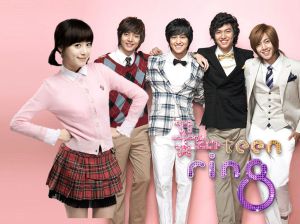 ← This World Is Too Crazy!! Buying A Set Of DVD-R/W From The Internet →