One Activity Of Our Community This Afternoon

On last meeting of our community we had decided to organize a small activity once a week. But after that in the following three weeks none of the activities were organized because of many various reasons such as too less people and bad weather. After the discussion during a period of time, we ensured that this small activity is taken place on Sunday afternoon. It meanly refers to the activity of climbing the hill. This afternoon was the first time we have organized the climbing activity although the number was still not many.

We chose to climb Laohe Hill this time. We walked the entire road. The first 700 steps were the continuous ones higher and higher. The sunshine was so warm and we felt so hot and I took off the sweater in my hands. After two short rests we at last got to the top of the hill. The number of the stone steps from the bottom to the top of the hill is about 700. So we call this section 700 step. From the top of the hill, we could look down all the things at the foot of the hill. You can see the scene from the following photo taken by mobile phone. So the definition is not as high as the digital camera. The road on the top was in repair. We saw an animal working on the road. Look at the following picture. Can you tell which animal is that? The horse or the donkey? You might be wrong. It is a mule!

The animal horse or donkey, can you identify?

After a short stay on the top, we went down the hill to the place we thought botanical garden. We wondered if there was a way that we could escape from the ticket to have a free trip in the garden. The fact verified that it was true. We really went into the botanical garden. What’s more, what surprised us most was that we had the luck to see a big fare of chrysanthemum. There were many basins of chrysanthemum. The photo above is one of them and so common as well. There were many other more beautiful bouquets of chrysanthemum with various colors and various categories.

Walking down the hill to the botanical garden 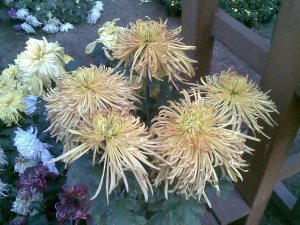 The big fare of chrysanthemum

When we were looking at those beautiful flowers, we heard the jingle from far away coming near and near. We looked to the direction of the sound and saw an old man riding on the back of an animal coming to our face. This was the second time we saw animals today. But this time was it still a mule? No, it was a horse.

A horse in the botanical garden

On the way back, we noticed there was a museum. We took great interests in it and that was just the time to open and the most important was that it was free of charge. It is Han Meilin art museum. It was built in 2005 and all the artworks were donated to Hangzhou by Mr. Han Meilin. He is a great artist in China and endured many hardships in his life. He creates many artworks and in Beijing, there is still another Han Meilin art museum. You can see more information in detail from the web. Photos are forbidden in the museum. So there was only one photo here. 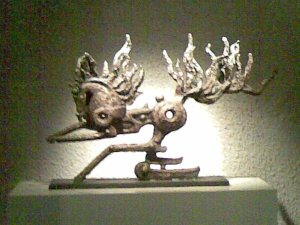 The art of Meilin